An interactive board game that celebrates that art form of collaging.

Anytime you combine different and unexpected imagery, you create a unique work of art called a collage. The idea for this project stemmed from my lifelong passion for collaging. I appreciate the unexpected outcomes that derive from mixing and matching images together. Collaging inspires creativity without the pressure of making something perfect; it is an excellent creative outlet for people of all ages.

Understanding the Rules of Play

An assemblage or occurrence of diverse elements or fragments in unlikely or unexpected juxtaposition.

Collaging requires flipping through stacks of magazines and newspapers and forming a sea of scraps scattered across the floor. The price of collaging also comes with paper cuts and sticky glue fingers.

Collaging can be intimidating.

Despite interest in collaging, getting started can feel too daunting for some. When you can make anything from anything, it can be tough to get started or decide what to create. Like a good creative brief, it's easier to design with constraints than without.

Sourcing and cutting out a ton of imagery one by one takes time and is usually the most time-consuming part of the work.

Even after all the time and work invested in crafting a unique collage, it is typically short-lived and will likely end up in the trash instead of on the wall in the long run. 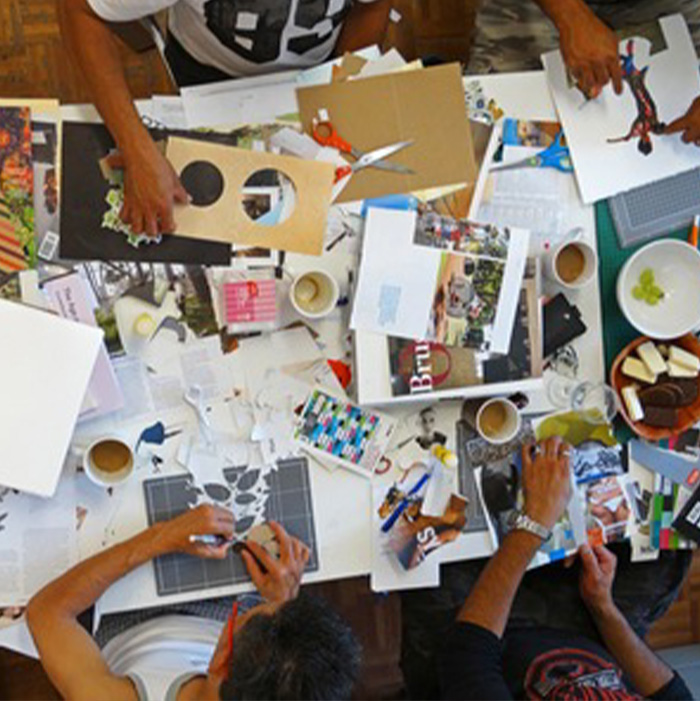 A scene of collage fun and and its messy mayhem. Image sourced from: theownershipproject.org 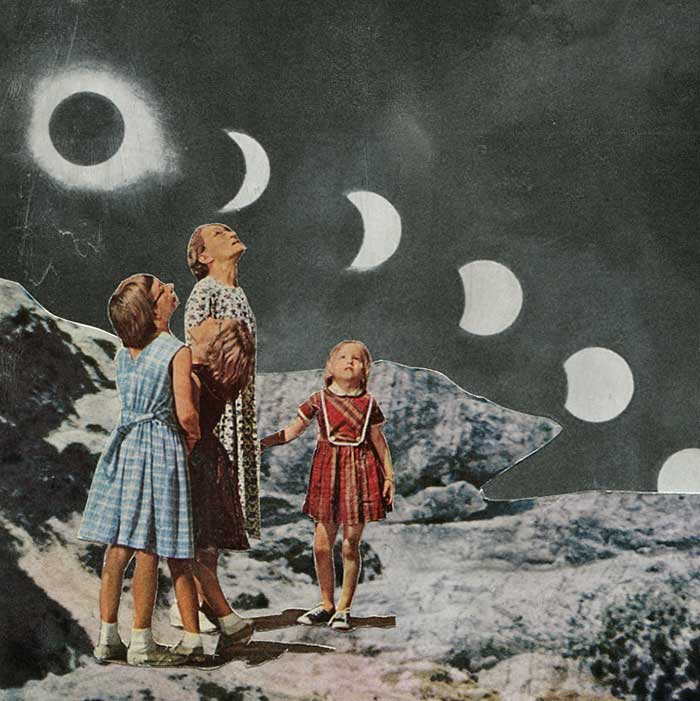 An image of a collage called "Many Moons" found on instagram by @gruelestate. 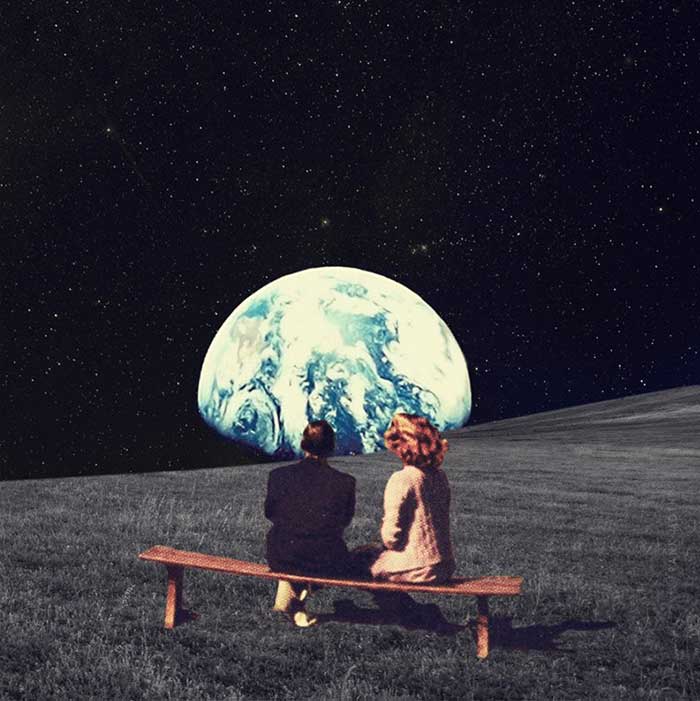 Another image of a collage by Frank Moth. See the full image and more of the artist's work at: frankmoth.com/

After realizing the rewards and the challenges of collaging, I strived to design a solution that could help the craft maintain its joy while eliminating its challenges.

My proposed solution is to design an interactive board game that provides players with the resources needed for endless collaging creativity while eliminating the mess, intimidation, and time effort from the equation. Less planning and more making.

This game is for adults who:

- Love to create and the creative act of collaging.

- Want to create on their own or with others.

- Are looking for an icebreaker to encourage people to work together.

Create an interactive board game that provides all of the joy of collaging without the labor. The game will include pre-cut images to work with and challenges to get those creative juices flowing.

Understanding the Rules of Play

I had never designed a game before, so I began by researching game design in order to understand how I could transform a traditional craft into an interactive game.

In a book called Rules of Play, I learned about a concept called 'emergence,' which became a guiding principle in my design. As explained by Jeremy Campbell, emergence occurs when "a modest number of rules applied again and again to a limited collection of objects leads to variety, novelty and surprise. One can describe all the rules, but not necessarily all the products of the rules...." 1

Emergence attracts players to replay games more than once—realizing that despite the built-in boundaries, multiple outcomes still exist. The result is elongated interest and engagement in a game.

It should spark an emotional or psychological response from players. Making art fits these criteria because collaging inspires creativity, excitement, and a feeling of fulfillment.‍

The game should provide a variety of outcomes.‍

The game should include numerous pieces, so players have several choices of what to use and infinite possibilities for piecing them together.‍

Players must need to make decisions and take action.‍

This insight helped me consider the inclusion of challenge cards that require players to create within specific constraints. ‍

There must be an obstacle to overcome.‍

Designing timed challenges could increase the game's complexity and make it more exciting in solo or group play. Playing for the highest score creates additional competitive obstacles in group play.

The research into game design helped me build a framework of rules for how to play the game. It also helped me recognize the innate quality of emergence in collaging and validate my proposed solution. For example, even if players have the same selection of pieces to work from and the same challenge, the outcome will still vary based on each person's unique choices and interpretations.

Now that I had determined the rules of play, I started researching what collage images (i.e., the pieces) I should incorporate into the game. I conducted landscape research on images of collages and collage artists. I collected a sample of their artworks, then I identified any themes that repeated across the examples (like images of nature, geometry, architecture, and technology).

Using this as a starting point, I created a list of items that could exist within each of those main categories and began sourcing images for my pieces on royalty-free sites like Unsplash, Flickr, NASA, and the Library of Congress. 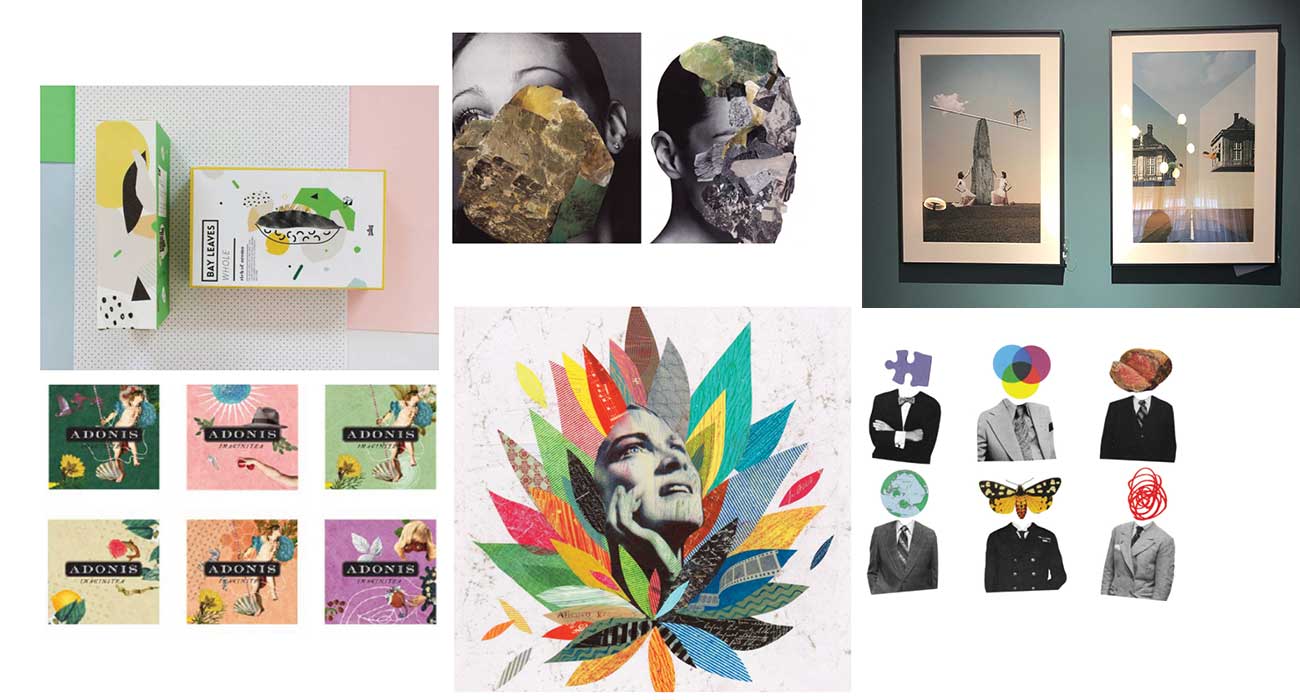 A collection of images I gathered during my research. The two framed images in the top, far right were captured in a gallery I visited while making this project.

For the question prompts, I also started by researching questions that help spark creativity. Using this research as a baseline for inspiration, I began ideating some questions of my own.
‍‍

Below are some of my first draft questions.

Now that I had some images and questions prepared, I decided to build a game prototype and test it with friends. My goal was to discover if the game was intuitive and fun for people to play and if there were opportunities to improve it.

Printing and cutting out the pieces on regular printer paper, I invited three friends over to play. Through this process, I made some remarkable discoveries that resulted in a much more compelling and creative game. 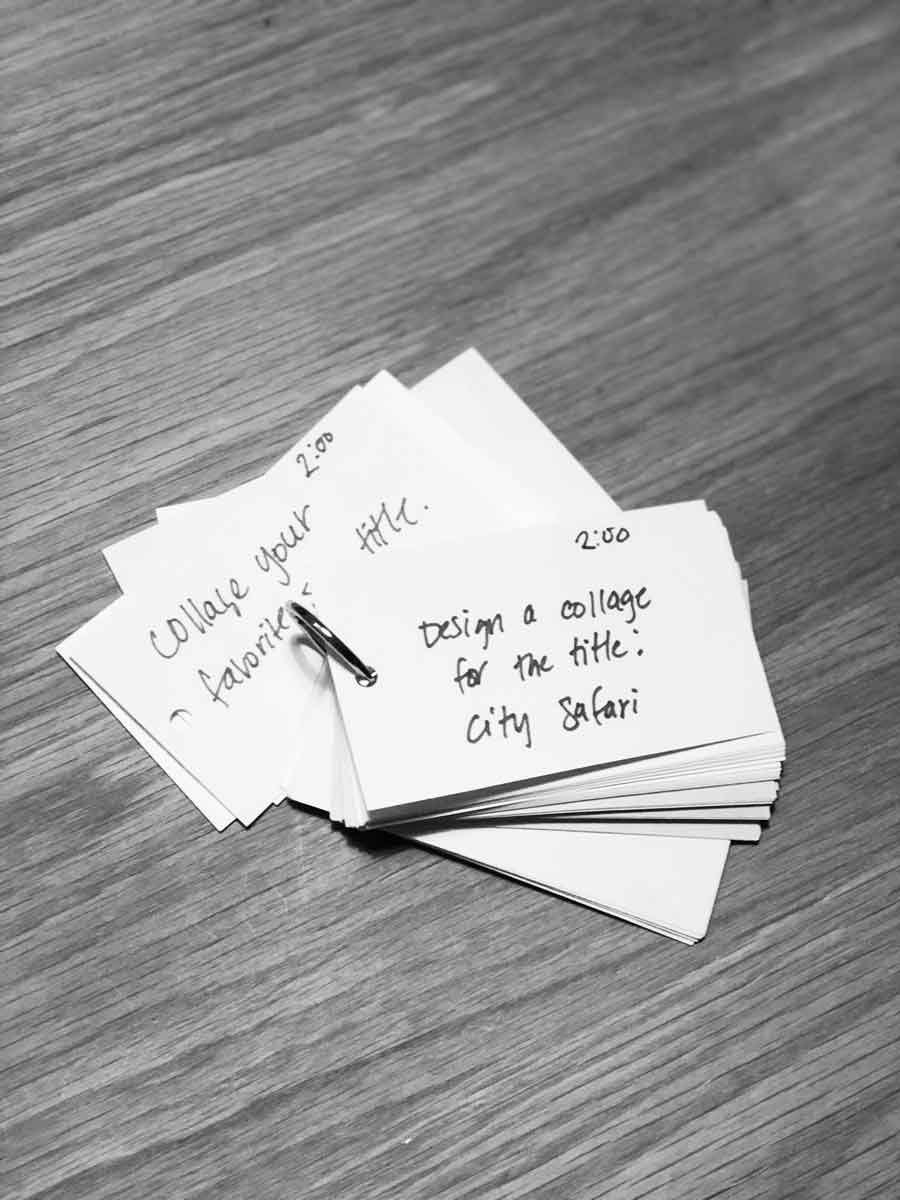 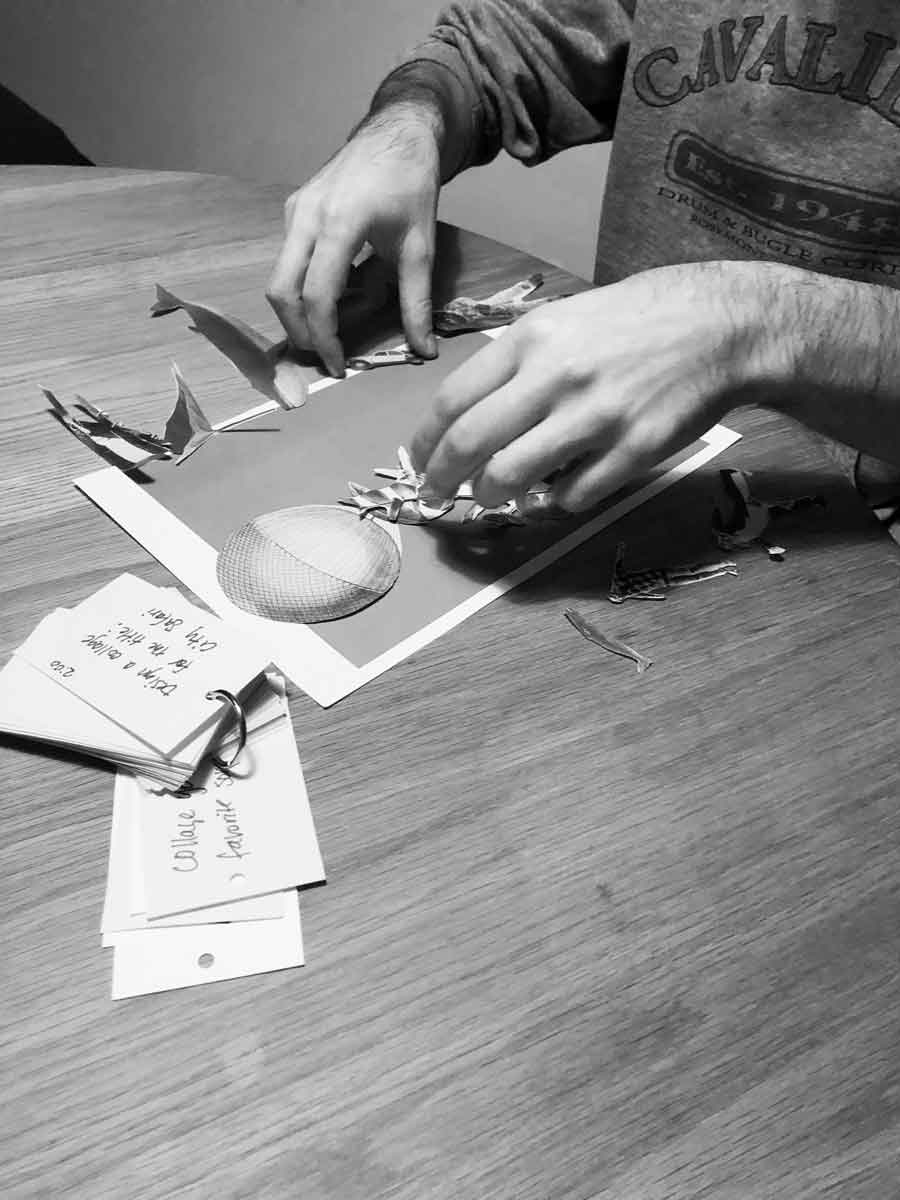 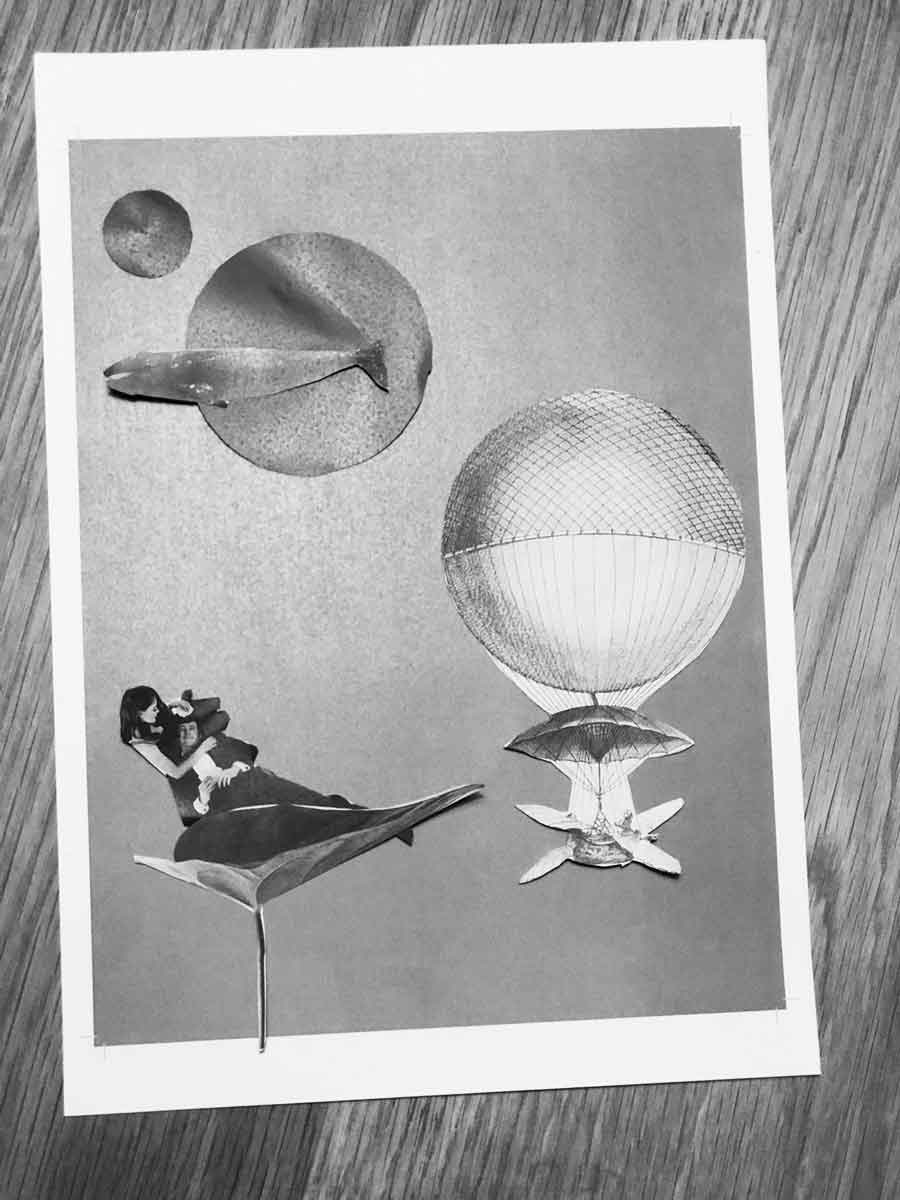 Players got more creative when the prompt wasn’t too personal or specific (i.e., like collaging your favorite song.) Specific questions resulted in players looking for specific imagery. More time was spent searching for images vs putting something together.

Next Steps: Revise the challenges to be more imaginative and abstract, like the “city safari” example.

1-3 minutes is plenty of time.

Some of the challenges were 5 minutes, but people seemed to get bored in the longer challenges and lose momentum towards creating. The game works best in tighter time frames where players are racing against the clock.

Next Steps: Break down challenges in 1 to 3 minute increments. Retest prototype and re-determine if new times work.

Next Steps: Be considerate of this in future testing sessions and make sure color is intentional in final design.

The Collagist is the merging of the words "collage" and "artist"—a name that holds a sense of pride and ownership for one's creations.

The tagline evokes a sense of magic and enticement towards the game and the player's journey with it.

A short animation I made in after effects that depicts images coming together, then fading away and making room for another creation.

After sketching some initial ideas, I began designing the final product. The visual direction conveys a refined approach to collaging, and is designed with pieces that are included in the game. The goal was to create packaging that an owner would want to display in their home—­emphasizing the idea that collaging is a real art form and separating it from the stigma that collages are crafty and kitschy. Collaging has been around for ages, so I chose typography and colors that felt modern but also timeless, just like the act of collage. 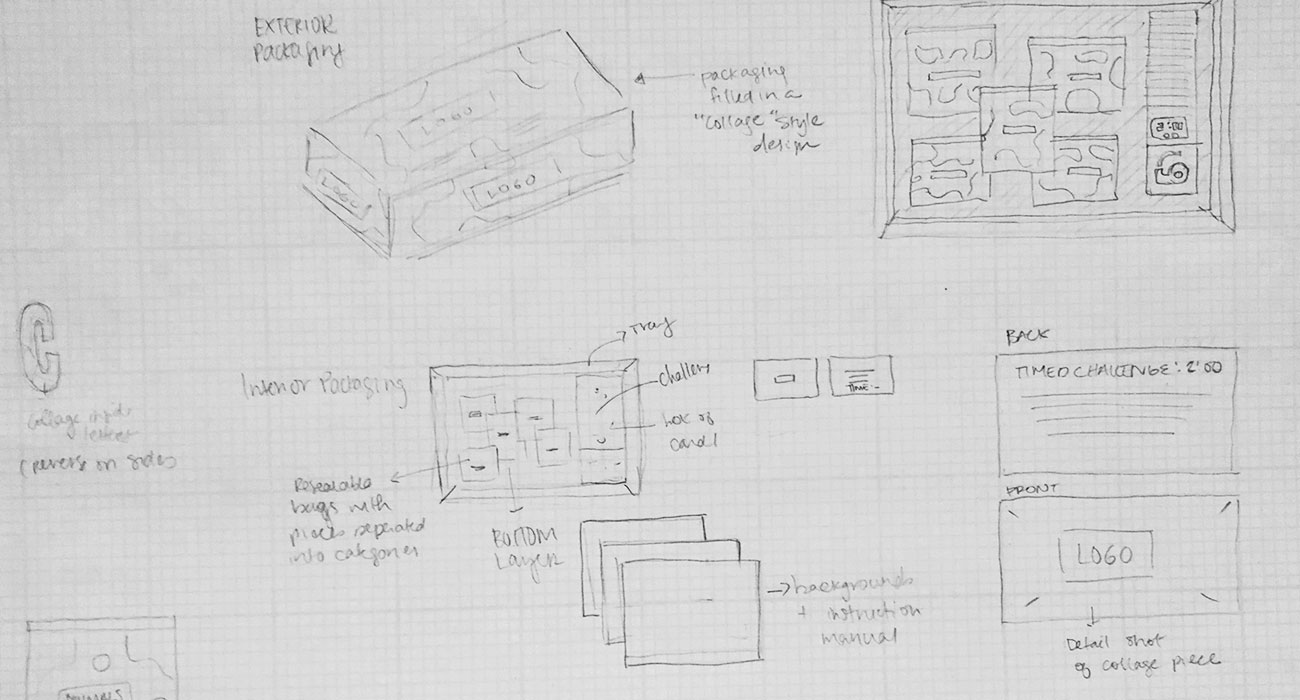 Some initial sketches I made regarding the packaging of the game. 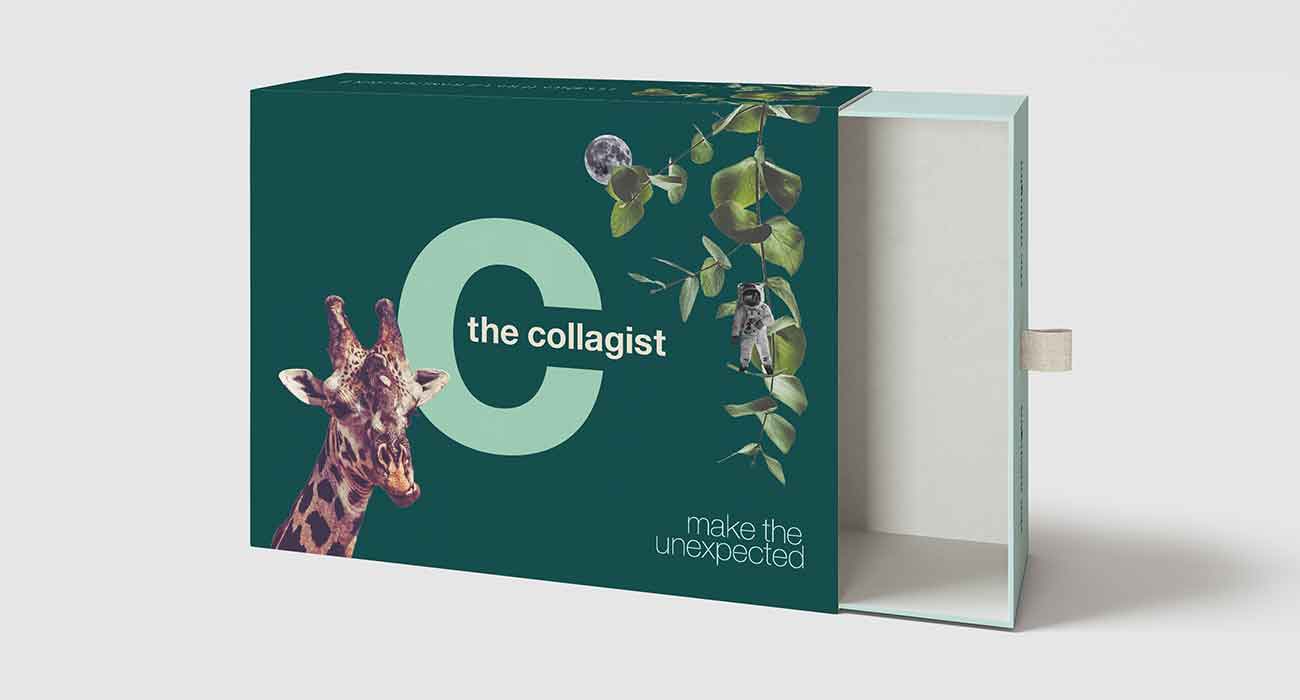 The packaging is designed so players may want to display it prominently in their home, which in turn can encourage dialogue and play with the game.

Here is a selection of some of the final pieces—a variety of images that provide players infinite possibilities of combination and creation. Pieces are also scaled at different sizes, ­ensuring a good range of contrast in scale to make more creative choices.

I applied a custom photoshop filter to every piece in order to obtain an elevated sense of cohesion no matter the combination—generating a more refined look to collages compared to the traditional collages. 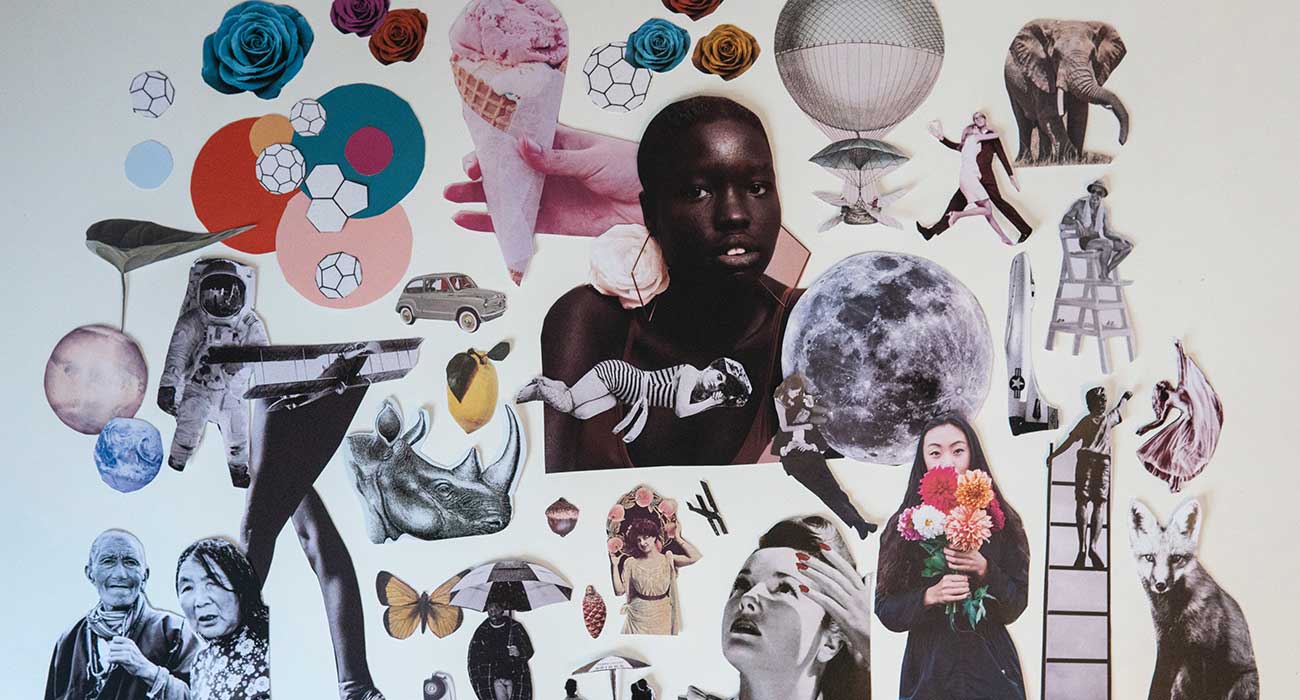 Each player also chooses their own "canvas" to build their collage on top of. The canvases are a mix of colored and photo backgrounds that offers players additional options and creative freedom. 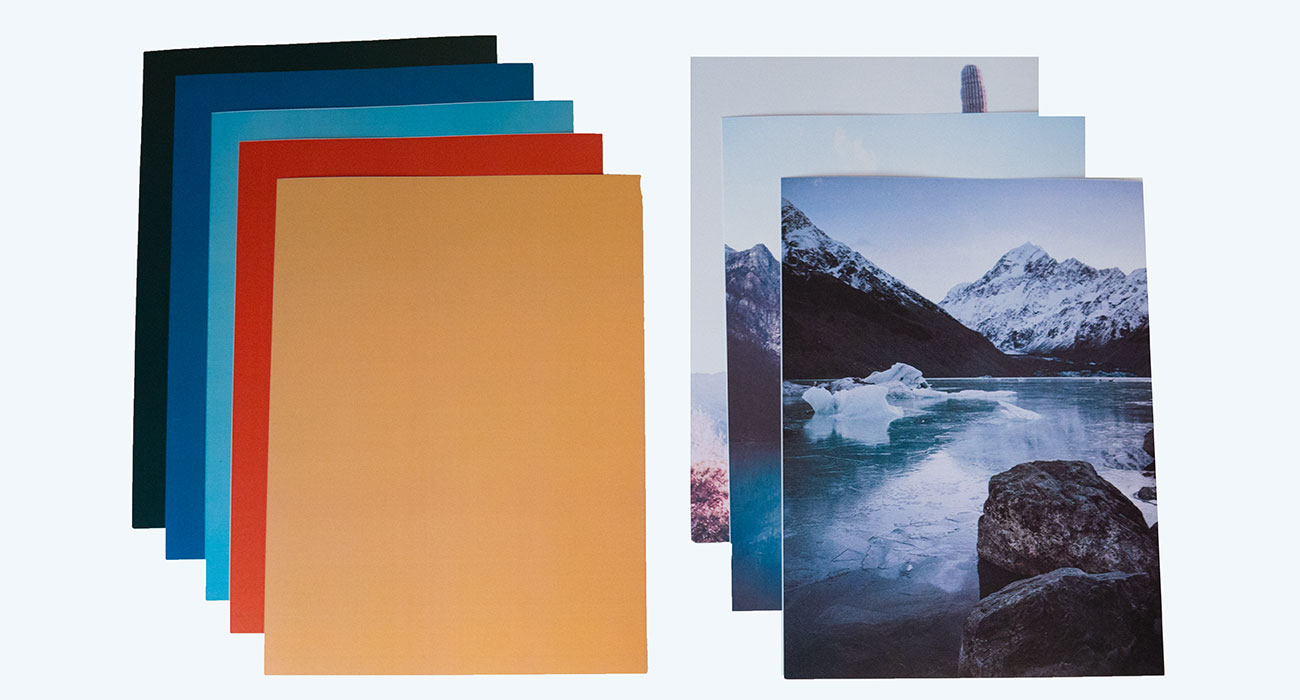 Canvases are the players' backgrounds that they collage on top of.

Challenge cards are color-coded by the time limit—a lesson I took from my prototype testing—so players can choose a card based on their time preferences.

I also revised the challenges to be more abstract—encouraging creative interpretation from players and reducing the lack of specification. This insight from the prototype testing session resulted in more fun, unique and compelling challenges to work with and drastically improved the game's outcome. 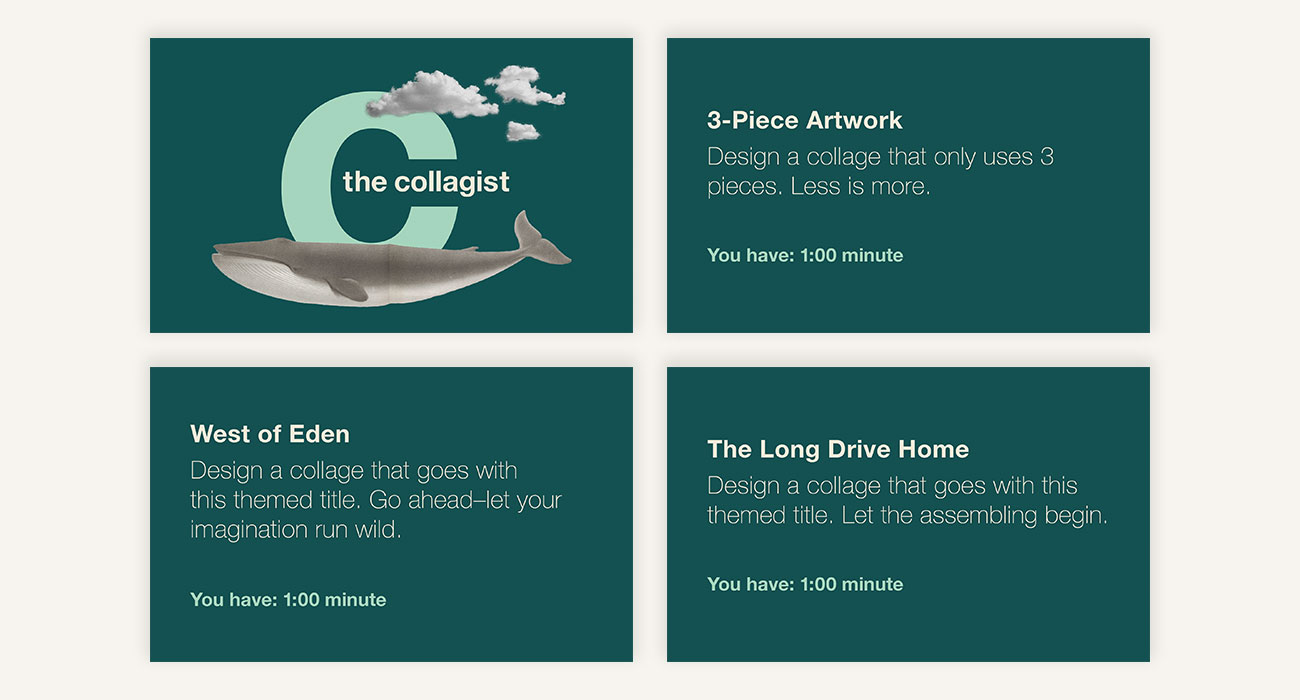 An assortment of playing cards for 1 minute play. 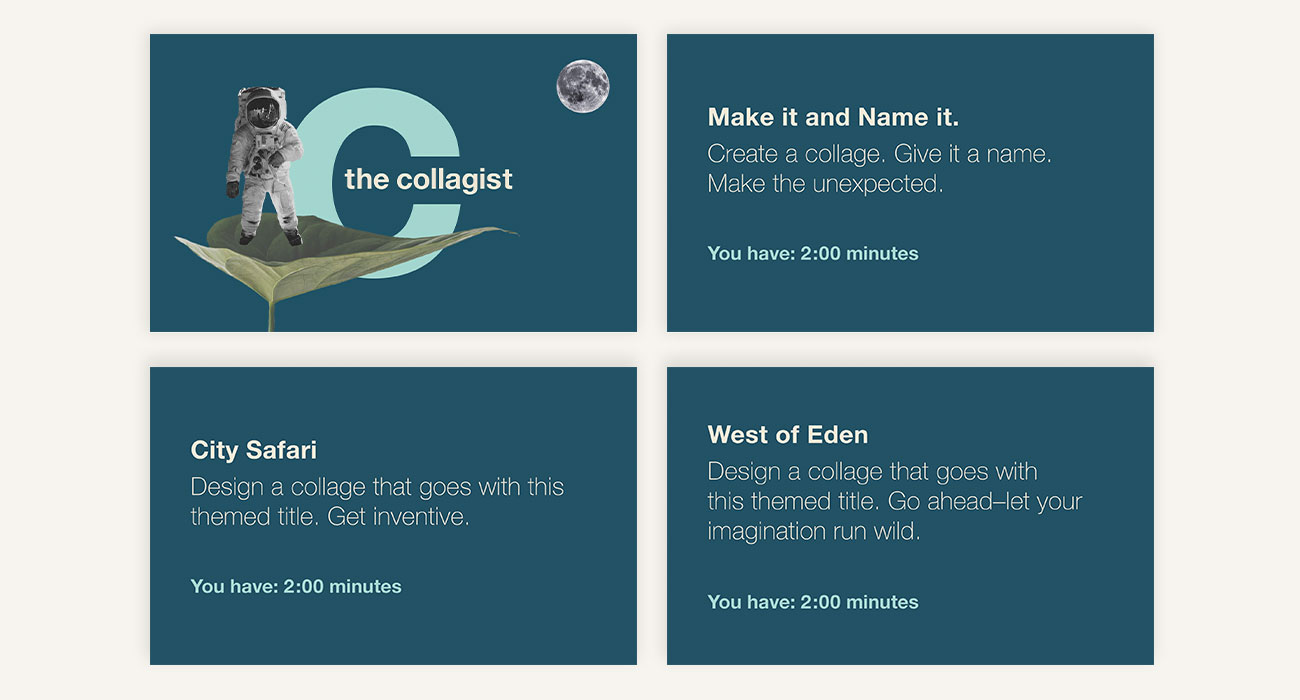 An assortment of playing cards for 2 minute play. 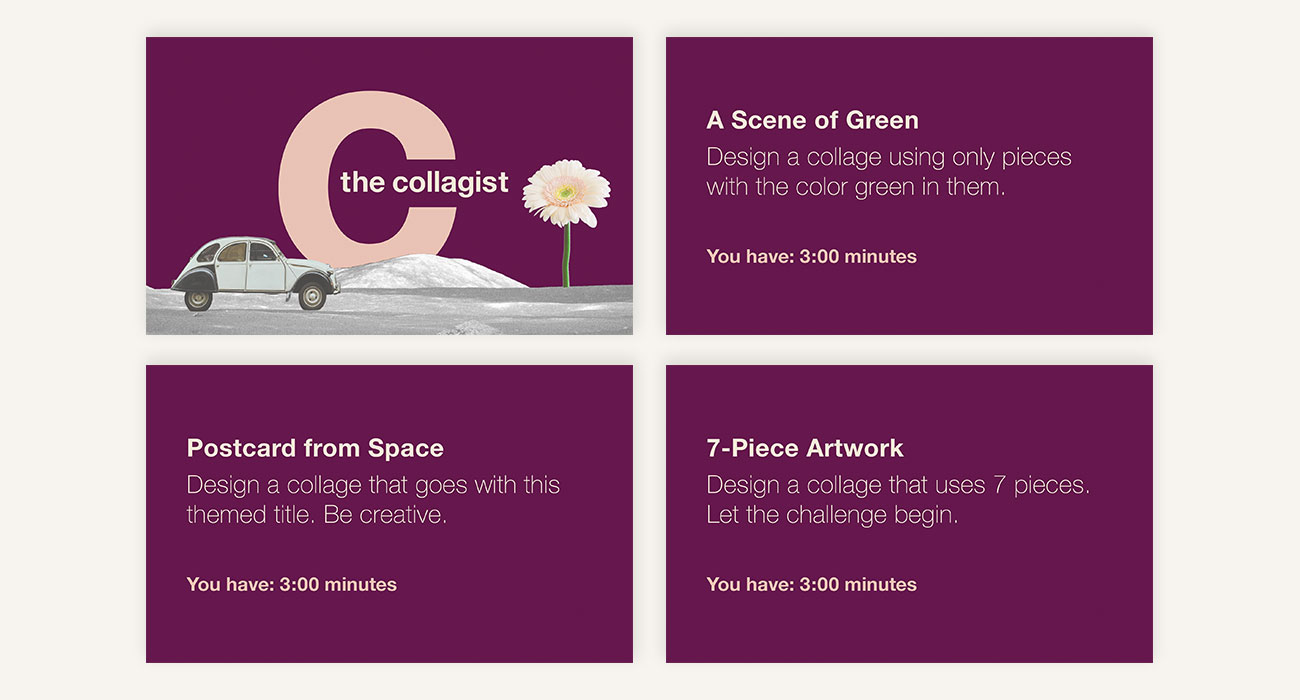 An assortment of playing cards for 3 minute play.

Lastly, I created a manual that explained the rules of play for solo and group games.

The game can be played individually as a timed creative exercise or with a group as a scored game. In group play, players evaluate each other's work and explain their design rationales. This direction promotes artistic dialogue and treats collages like a proper art form worthy of discussion. The Collagist is a celebration of collages and the artists who make them. 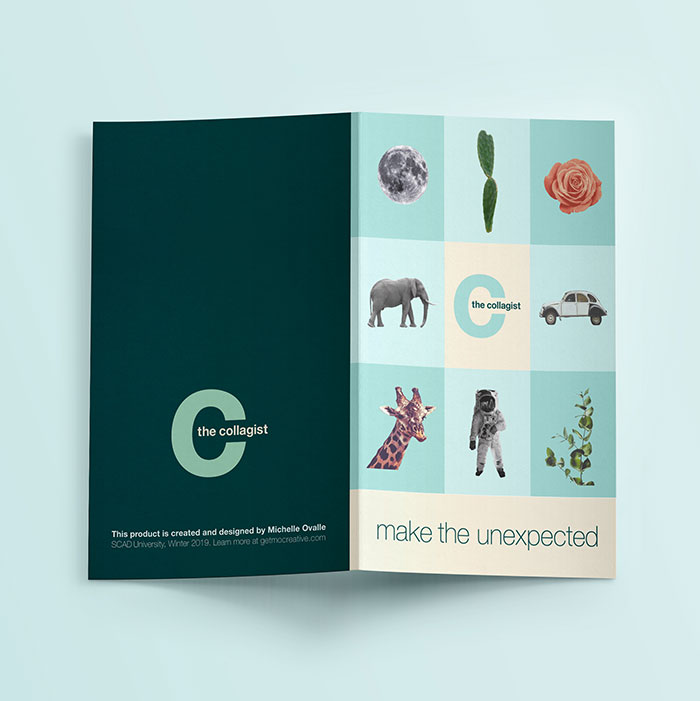 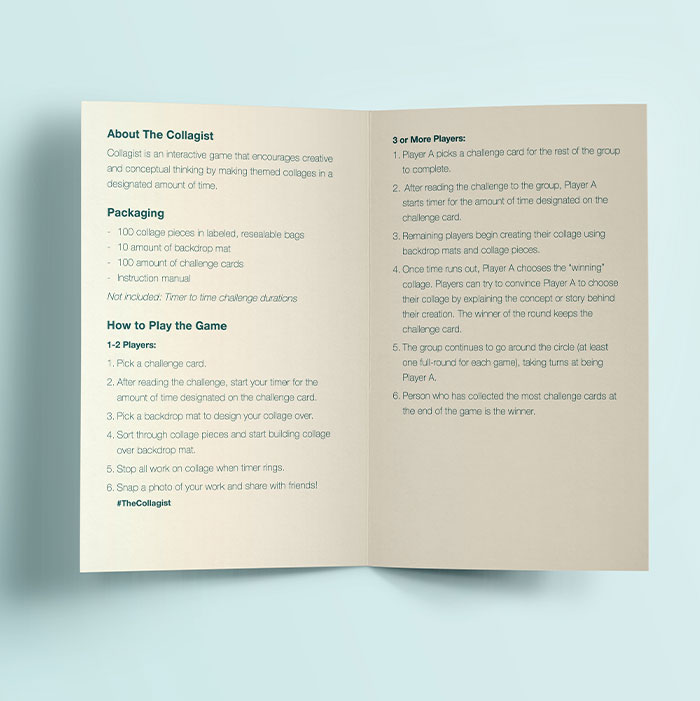 Once I completed the final design, I tested my prototype once more with friends. The changes made after the prototype testing drastically improved the game. Players liked the challenges. They were driven to think fast and outside the box while also having fun. And every challenge resulted in a unique, one-of-a-kind artwork made by the Collagist.

Below are some completed challenges my friends created with the updated prototype. 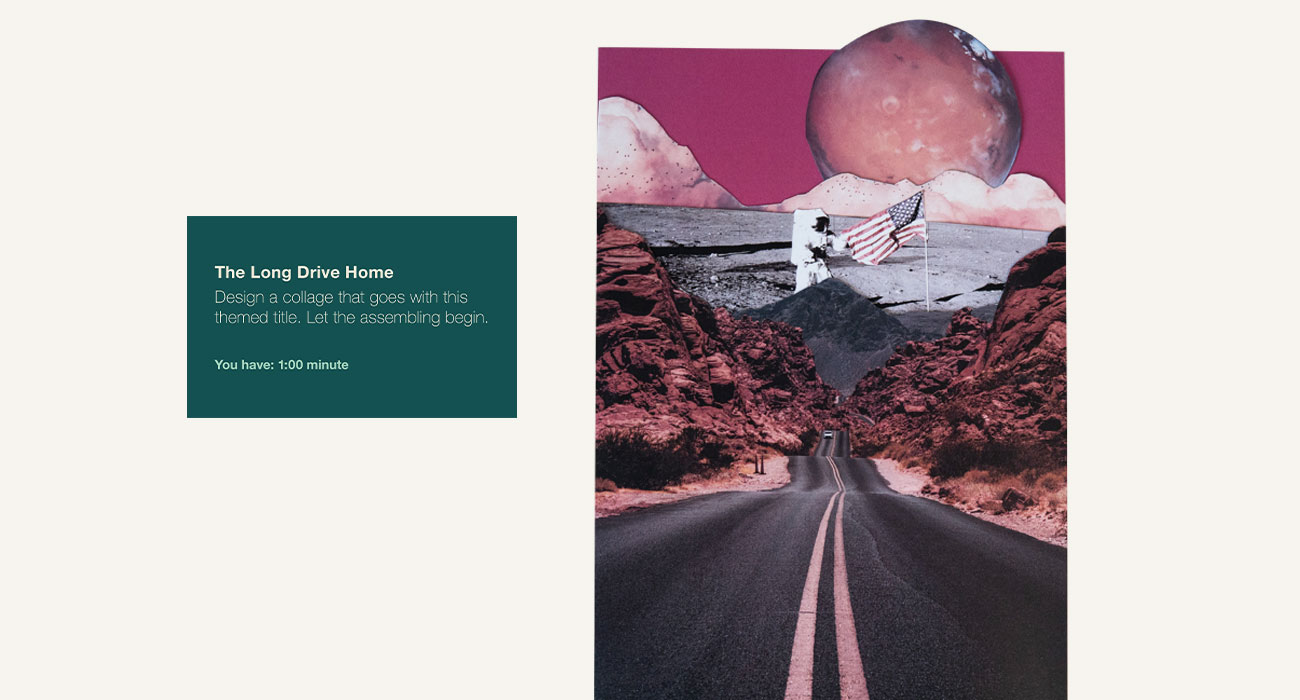 Collage Challenge: The Long Drive Home. Design a collage that goes with this themed title. Let the assembling begin. 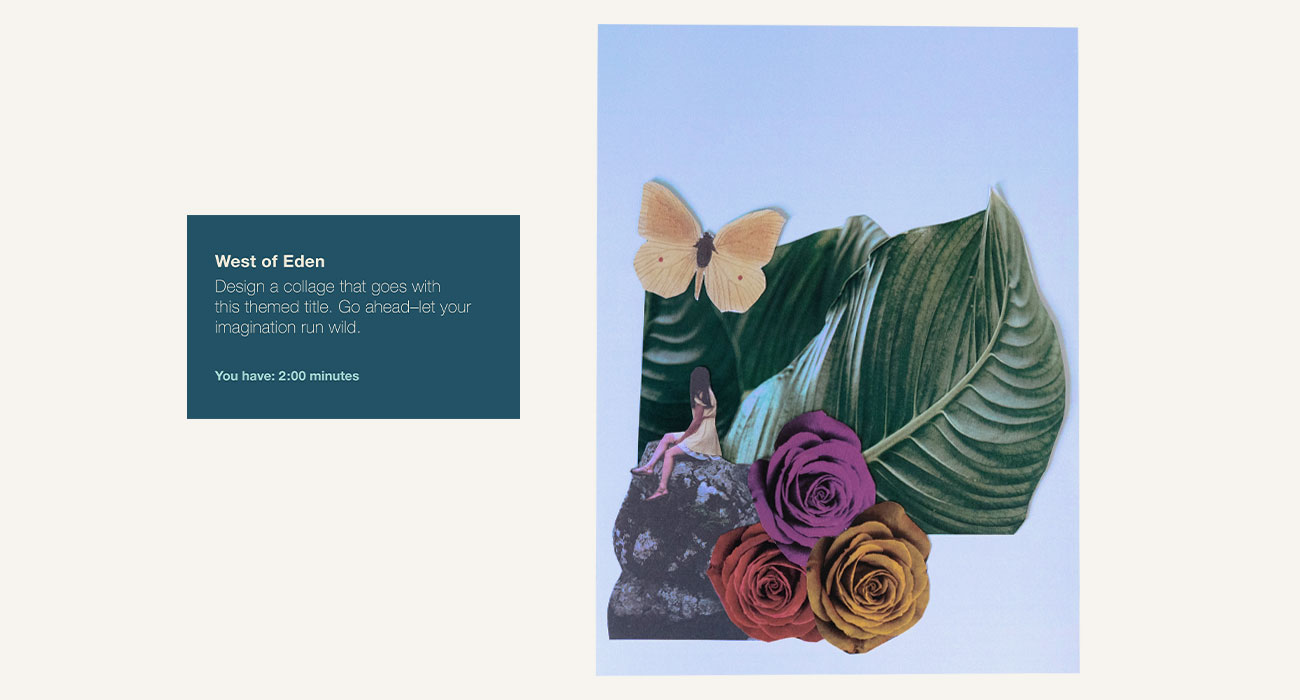 Collage challenge: West of Eden. Design a collage that goes with this themed title. Go ahead—let your imagination run wild. 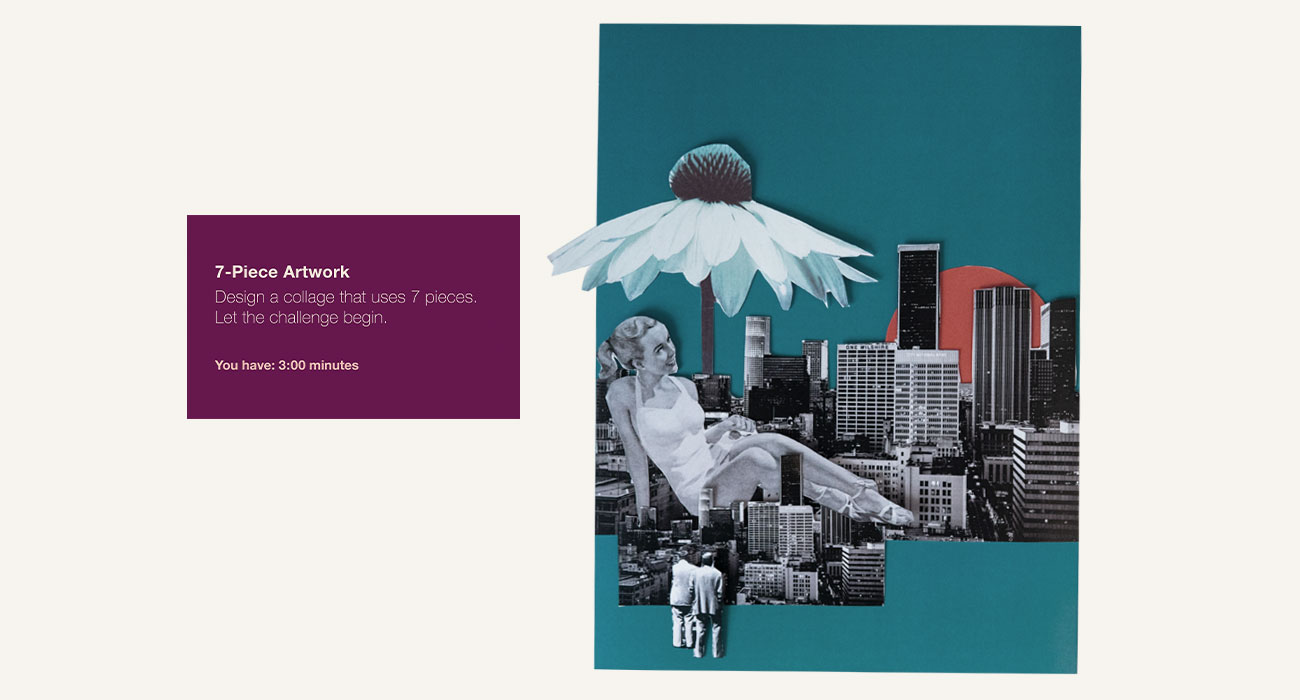 When sharing my idea with others, many people wished this game actually existed, which is a testament to its viability. I hope to one day launch this game as an actual product. I believe it provides opportunities to encourage creativity, build a community, and develop a business.

For players, this game enables people to jump into the joy of collaging without the challenges identified earlier. From a business perspective, this game shows potential to expand by launching sequential batches of image pieces that a collagist can add to their gaming collection.

This game can build a community by using social media to feature creations from everyday players and showcase a curated collection of collaged artwork made with the Collagist.

I would also love to explore opportunities for this game to have a potential digital counterpart, where players could control the scale of images and collaborate or compete with people in other physical spaces.

Every form of design has guiding principles for success.

I loved learning about some of the fundamental rules behind game design. By researching and applying these rules, I transformed a rough idea into a working product that was compelling and valuable to its players.

Your users can help make the end result better.

Once again, prototyping and testing provided insights that resulted in a better and more innovative outcome than the initial idea.

Even in low-fidelity prototyping, people can interpret color to have meaning. Make sure when applying color—in all levels of design—it is done intentionally to provide clarity, not confusion.